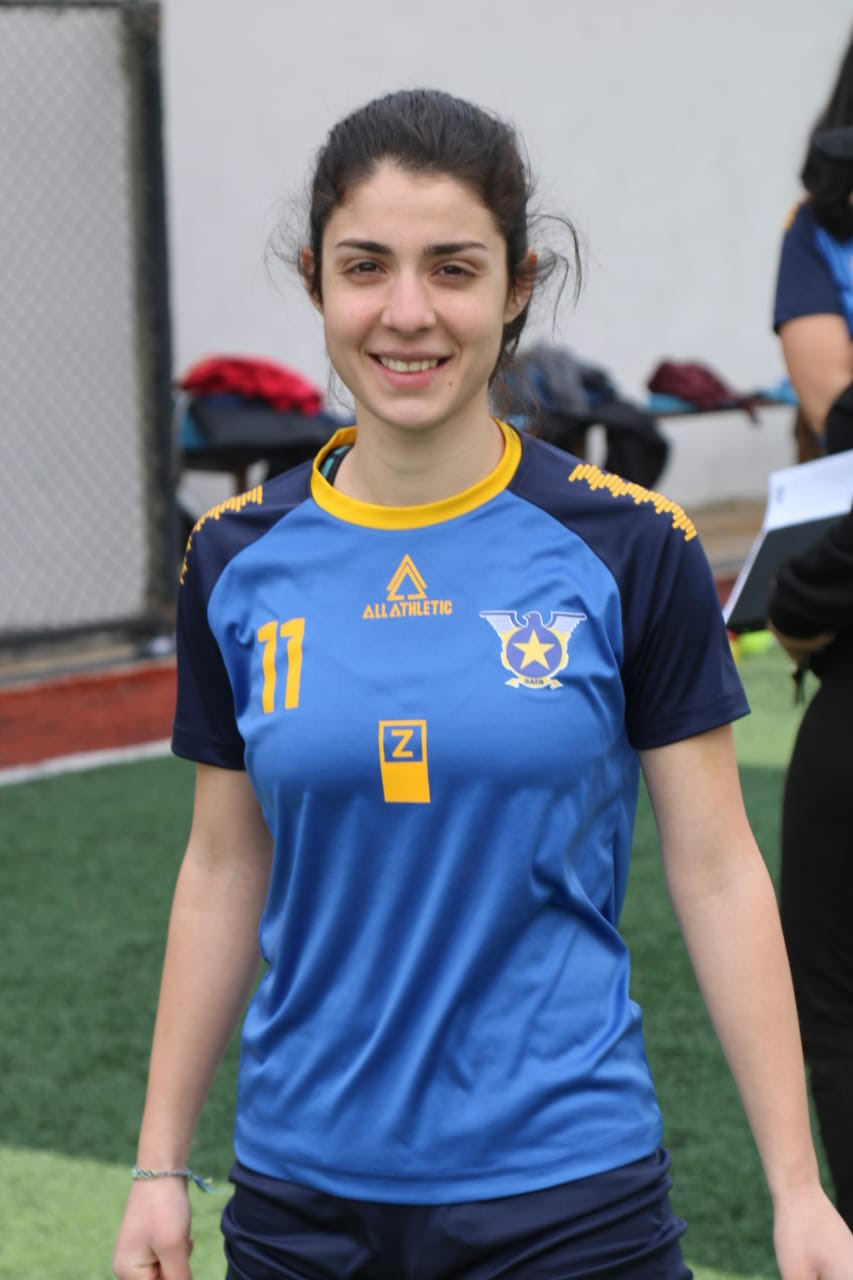 Being a football player in Lebanon has always been regarded as a hobby, a pass-time activity, or even a fun, unconventional fitness method; that is one of the main reasons why it is rarely considered as a primary career option, leading most Lebanese athletes to stay at an amateur level while pursuing a career in a more academic/traditional field. This reality is no different for Women’s National Team player Aya Jamaleddine who, in addition to training and playing as a defender for both club and country, juggles between being a teaching intern, a football coach, and a graduate university student.

Almost all Lebanese youth are encouraged and persuaded to go for higher education in selected sectors, and Jamaleddine first took an interest in medical sciences during her school years and after witnessing her sister study it, but she eventually decided to major in education. “It took me a while to figure out what I actually wanted. At school I was very good at biology, there were times when I wish I went for medicine, but I’m happy with where I am now.”

After obtaining a teaching degree, Jamaleddine decided to take a turn in her academic path and follow her main passion: sports, and is currently pursuing an MBA in Sports Management. “At first I really regretted it [teaching degree], then I thought everyone makes their own future”, and this change of direction allowed her to find and work for a career in the field she loves most.

Choosing to study the managerial side of sports over other aspects of physical education stems from her love of sports, especially football, rather than fitness and gym training. This meant more focus on organizational and coordination techniques, which are vital for the management of football teams and their trainings. “I get bored quickly [with gym training] and like to move more. Honestly I like management, I like organization and coordinating, I feel like it fits me better.”

Growing up in Australia, where sports are considered an important part of youth development, Jamaleddine was met with full support from her family and school environment to participate in a variety of athletic activities. “As a child I used to love sports in general. My mom took me to swimming, and at school I would play Australian football league, I would play cricket, I would play everything possible.” She explains that children were recruited by sports academies and national teams at a very early age to help them develop, with the right training and education in their chosen disciplines. “Sports were very important there. I remember at the age of six they were recruiting children so that they make sure that you grow with them”, and at that time, she was introduced by her friends to a football academy where she trained and played for many years, and even caught the eye of the Australian National Team, before moving to Lebanon at the age of thirteen.

Although women’s football has only recently begun to gain popularity, fortunately for Aya, her hometown in Lebanon also happens to be home to the Women’s Football League title holders SAS, who are also known as one of the country’s most prominent youth football academies. Back then, and like most clubs and academies competing in the Women’s Football League today, SAS did not establish a girls’ team, but Jamaleddine still trained with the boys’ team until the academy was able to launch a full girls’ team that would later compete in the league. After her first couple of experiences in the league with SAS, she played with the other local club, Al Akhaa, before eventually making a move to Safa Football Club where she has recently been making a massive impact on the league with the rest of the squad.

One of the proudest moments of an athlete’s career is getting a call-up to the National Team. Aya Jamaleddine worked hard enough to earn this opportunity as she experienced this rush a few years ago when she was called up for the U19 Women’s National Team, and later again in 2019 when she was included in the Senior National Team that participated in the West Asian Football Federation (WAFF) Championship, where she made four appearances in all of the Lebanese National Team’s matches and was an asset to the squad, as the Cedars’ WNT secured the third place. Jamaleddine was able to describe this experience in one word: emotional. “You don’t realize how much you want to do for your country”, Jamaleddine told herself after earning a spot on the squad, and this opportunity to be included in the National Team only motivates you more to push harder and stay on the top of the list. It’s also an extremely proud feeling representing Lebanon and your club, she adds, “you really want to do well, you feel like you have a whole country riding on your back.” Other than the pride of representing your country, Jamaleddine found an overwhelming sense of camaraderie among the girls who come from different clubs and cities just to train, compete and represent Lebanon in the best way possible.

Jamaleddine gives credit for these recent impressive results to the efforts of her teammates as well as the work done by Coach Wael Gharzeddine to help them reach higher potentials. Aya Jamaleddine believes that the senior team’s progress, along with the U15 and U18 championship wins, have helped bring more attention to women’s football in Lebanon.

Women’s football has been disregarded in the past, but, unlike its situation in Lebanon, has recently begun to gain more attention and support in different parts of the world. “In Lebanon we’re slow to take decisions in a lot of things, I think we need a bit of time”, and the lack of interest in women’s sports by the Lebanese public has also added to this issue in Jamaleddine’s opinion. No hope is lost, however, as she sees a number of simple solutions that can aid Lebanese women’s football to flourish.

First, even though the Lebanese FA has been showing more support, Jamaleddine would like to see the women NT to be given more exposure and involvement in international tournaments as well as friendlies. Second, getting more media coverage, as broadcasting some matches will boost the women football audience. Third, the continuous efforts and hard work put in by the girls themselves to always achieve better results, “all we can do is keep training and proving everyone wrong.”