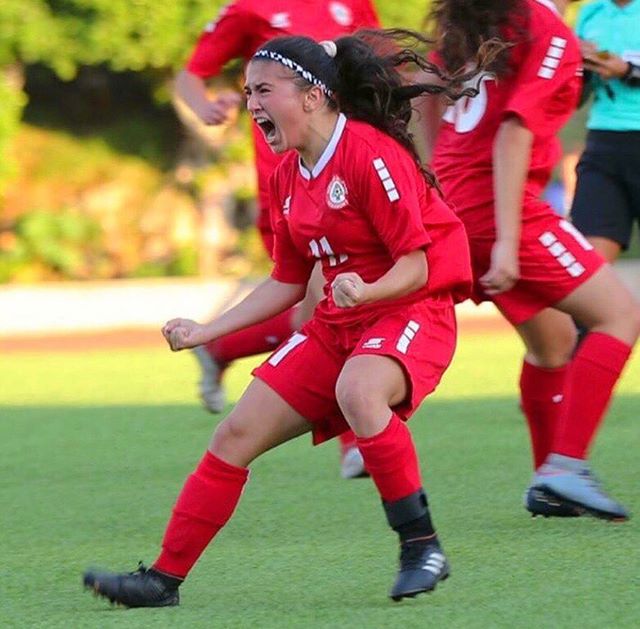 It’s no secret that having a career as an athlete takes an immense amount of time, hard work and sacrifice. Intense training schedules and specialized diets become requirements rather than just a lifestyle choice. These sacrifices result in great rewards on one side, but dangerous risks on the other. The latters are unpredictable and can threaten entire careers, which is why many athletes always have an alternative path, in case things go south. Lebanese National Team and SAS forward Haneen Tamim shares this mentality with many athletes and is pursuing her dream of becoming a professional football player while also studying for a university degree.

Tamim is currently majoring in Nutrition and Dietetics, a field she chose because of its proximity to the athletic world. It also gives her the option to specialize later in Sports Nutrition, which is a major aspect in anyone’s lifestyle, let alone the athletes. She still has the intention of having a career in football and believes that it can be achieved by getting an opportunity to play abroad. “It’s my dream actually, and I’m trying to work on it.” However, her studies will always be a priority, since Tamim believes that a career in football can be unpredictable. “Something might happen, and I wouldn’t be able to play anymore, so I should have my degree to be able to continue in life.”

Her love for football began during her childhood when she was around eight years old. Tamim would always accompany her older brother and his friends to the neighborhood playground and liked to be included in their football games. According to her, playing with them boosted her football skills, “I would watch how they played and learn from them”. She later began playing football with her school team and joined the FC Beirut boys’ academy with some of her classmates, which gave her a big push back then when not many girls’ football academies or teams existed.

It wasn’t until Tamim moved to a different school that she started to compete with her new school team, helping them win several tournaments across Beirut and Mount Lebanon. Her apparent talent and success in those competitions led her school coach, Yehya Cheaib, to introduce her to the Girls’ Football Academy, GFA, who had begun to train and compete in the Women’s Football League.

Playing in the Lebanese Women’s Football League was an entirely new experience for Tamim, and completely different than the school competitions that were played with five or seven a side team. She was still able to adapt to this higher level by regularly watching matches and playing football video games, whether with her brother or even online. “It really does help you understand the game since you’re controlling everyone on the team and not just the player who plays in your position.” She then gradually began to apply the things she learned in her game, giving her an edge over their competitors.

After three successful seasons with GFA, Tamim thought it was time for a new challenge and joined the league title holders SAS. Being part of the league champions team in the 2018-2019 season came with an exclusive privilege: attending the first WAFF Women’s Clubs Championship in Jordan, which Tamim describes as her favorite international experience. Even though the rest of the participating teams had professional and foreign players in their ranks, Tamim and her SAS teammates didn’t feel that their squad, deprived from foreign players, gave them a disadvantage, and instead went on to finish the tournament in second place. She also felt that they, as SAS, had a mission of asserting The Cedars’ presence on the regional scene since they were representing Lebanese women’s football.

Representing Lebanon wasn’t unfamiliar to Tamim, who has been included in the U17, U19, and Senior National Teams. She was first called up in 2015 for an U19 tournament in Jordan and the U17 Arab Cup in Qatar but was disappointed to not have been included in the senior squad that year. “I didn’t just give up and I didn’t stop working on myself and kept working to the point where I was able to play with the seniors”. She eventually made it to the senior level in the next National Team call up in 2017. “It’s something I advise everyone to do, to never give up.”

Tamim’s most recent success with the Senior National Team was in the 2019 WAFF Championship, where she scored three goals to help Lebanon secure third place. Her persistence to be part of the National Team comes from the emotional combination of pride and responsibility, “the idea that I can play my favorite sport and be able to represent my country was an unexplainable feeling.” She also believes that it gave her a closer connection to Lebanon, as she felt an enormous pride to sing the National Anthem and gave everything she had on the pitch. “It’s something I’ve never felt in my life, and I don’t think any emotion can ever top that.” Tamim admits that she was lucky enough to be included in different age groups of the national team, and that the newer generations are even more fortunate to have more international experiences at a younger age, which will boost women’s football in Lebanon.

Women’s football in Lebanon has been on the rise recently but still lives in the shadow of men’s football. Tamim believes that the main reason for this is that the latter has been around for a much longer time, and has built a huge audience over the years, which is why they currently have more media coverage and much bigger sponsors. However, she feels optimistic about the improvement of the women’s league year after year. Each new season brings more teams, audience, and attention. “For example, our final game against EFP was broadcasted and the stands were almost full, and that has never happened before.”

Tamim gives credit to the Lebanese FA for working hard in organizing the Women’s Football League, as well as improving the National Team. She also commends the efforts of FA Lebanon and other social media platforms in helping women’s football in Lebanon reach a much wider audience. The ex-GFA player strongly believes that football needs to be integrated in the educational system in order to introduce the sport to the younger generations and encourage talented girls who can’t find an outlet for their skills. On a personal level, Tamim and the other players have been working hard with their respective clubs to raise the bar for women’s football. “We can see that through the league competition, many teams have improved, especially this year where you couldn’t expect anything from any game.”