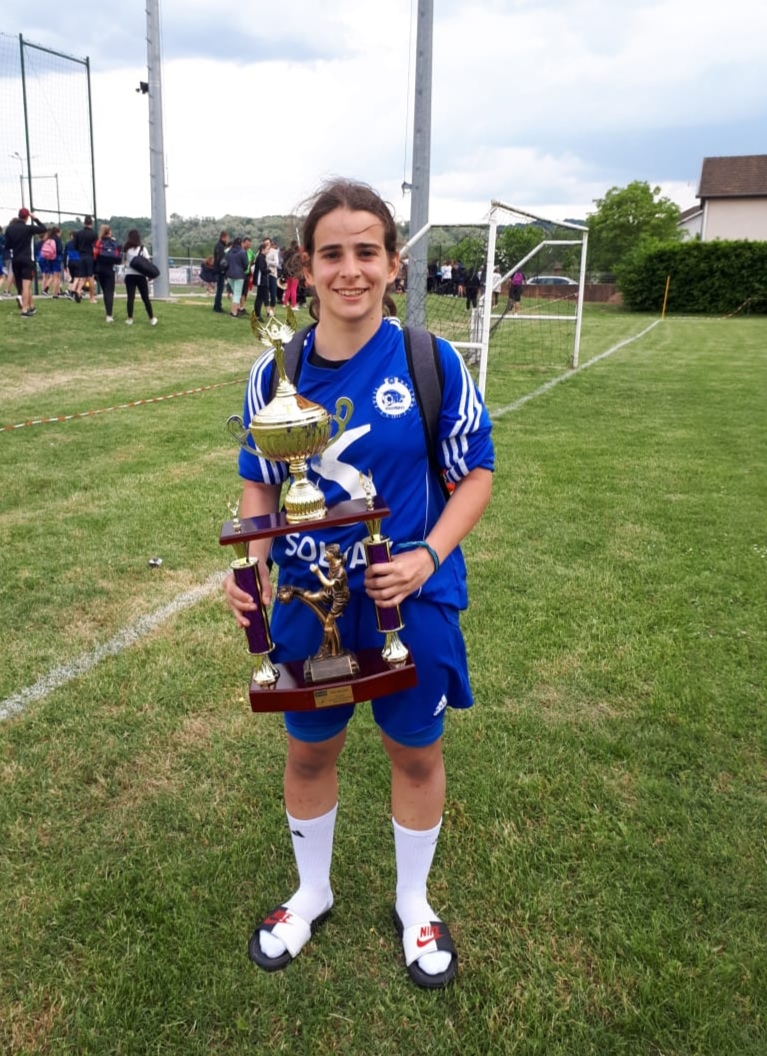 Rarely do we hear about Lebanese natives playing professionally in European and Asian football leagues, but we almost never hear about female Lebanese players with experiences abroad.

This may seem like a definite possibility in the near future, but at least one international success story happens to play nowadays in the Lebanese women’s football league. In the last few years, Ó Berytus midfielder Maria Aftimos bolstered her CV with a two-year experience in French football.

Aftimos’ move to France came when she decided to continue her higher education in Lyon. Like many young Lebanese athletes, she chose to pursue a university degree rather than a career in football. “In Lebanon you don’t have these opportunities. They always say sports cannot be your life here.”

While most athletes would go for a sports related field, Aftimos was more interested in studying her favorite school subject, history. “I thought of getting an education in sports abroad, but I said to myself that I already play football, so I already have knowledge about the field, so why not do something else.”

After obtaining her Bachelor’s degree in history, the Ó Berytus player began to see out her future options. “I didn’t want to be a teacher, so I decided to move to political science or international relations.” She then settled on a Master’s program in the political science field titled Security and Defense which was offered at a university in Lyon, France. “It’s something that we don’t usually know about [in Lebanon], and I believe we can’t live in a world without security and defense”.

Her football journey began in the early school years where she played with her school football team and at the Advanced Soccer Academy (ASA) for youth. After the girls’ team at ASA was shut down, Aftimos had to join another academy. She initially tried out for Girls’ Football Academy (GFA), but then decided to follow her previous teammates who joined FC Beirut. In her spell with FCB, she experienced for the first time what is like to compete in the Lebanese women’s football league.

“Our goal wasn’t to be champions. That season [2013], there were clubs like Sadaka and GFA, they had already top teams.” Nonetheless, FCB still managed to finish right behind them in third place, a proud achievement for a squad mostly made up of young first timers. “We gained a lot of experience and were exposed to the stress of matches every Sunday.”

Three seasons later, the FCB girls’ team was transformed into Ó Berytus. Keeping most of the original players, the team also started recruiting new players and improving the training quality. This transition boosted the team’s level as they remained among the top competitors in the league.

Unlike most talented league players, the ASA graduate is still without an international cap. She was called up for the U19 team after her first couple of seasons with FCB, but her skepticism made her turn it down. “I wasn’t very convinced with the National Team management, I heard it was built on personal connections.” Aftimos was later approached for the senior squad, but at an unfortunate timing, right when she was bound for Lyon.

Even though her main purpose for moving was education, the Ó Berytus player couldn’t imagine life without football. She joined a Lyonnais 3rd division club called Caluire et Cuire. “It was a very serious team, they had ex-OL players and I learned a lot from them.” She gained an unmatched experience while competing in the French 3rd division, and even reached the fourth round of the Coupe de France tournament.

After the first half of the season, her studies started to take a toll, and Aftimos decided to leave Caluire et Cuire. However, she was fortunate to find another team closer to home that could also fit her heavy schedule: 4th division club Eveil de Lyon.

The lower league level wasn’t an issue to her, as she believed that regular training and competitions can be beneficial anywhere. The ex- Caluire et Cuire player spent a season and a half with Eveil de Lyon and won a regional tournament, all while completing her Master’s degree.

Having played in foreign countries, Aftimos could draw the difference between the Lebanese league and those abroad. “When you play in Europe, you should be faster in everything, thinking faster, giving that pass faster, and developing faster.” She points out that, in France, teams always played with a well-defined system, unlike in Lebanon where clubs tend to be more laid back in their style of play.

The main reason for this is that children in Europe receive proper training and education in football and its tactics. The Ó Berytus player believes including this educational aspect in Lebanese youth academies is crucial for their development.

Another issue facing Lebanese football is inconsistency. “One week you’re playing on a small pitch and the next you’re playing on Bhamdoun’s huge field.” Moreover, the league is compressed to fit in a span of a few months, which doesn’t allow players to properly recover from the slightest injuries. The French leagues that Aftimos played in had season breaks that kept the players comfortable, and games were played in standard sized and well equipped fields.

“As every system in Lebanon, it all needs to be fixed from scratch.” The first step for improvement in her opinion is getting more funding. Besides, attempting to upgrade the league from amateur to professional will boost its audience and attract bigger sponsors.

Like most Lebanese players, Aftimos believes that international involvement is crucial for her development. “The first WAFF club championship was in 2019, that’s how late we are in this.” She suggests organizing more friendlies with professional clubs in the region, and maybe even in Europe, because being exposed to their different styles will improve Lebanese football.