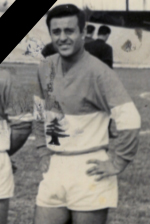 As if Lebanon didn’t mourn enough people this year… Yet, the country lost another citizen, as football legend Levon Altounian sadly passed away yesterday, 6 September 2020, in the Daher El Bachek Hospital in Roumieh.

Born on 15 February 1936, in Beirut, Altounian would grow up to be the captain of the Lebanese national team in the 1963 Arab Nations Cup, scoring 6 goals in the tournament and at least 2 other official goals in his international career. We can’t be sure how many goals he did score for the Cedars as we have little information about that era in Lebanese football.

Moreover, Altounian won two bronze medals with the national team, the first being in the Pan Arab Games of 1957 and the second during the Arab Nations Cup of 1963.

FA Lebanon sends its condolences to Altounian’s family during these sad times.

Lebanese clubs refuse National lockdown
Hassan Mhanna talks about his time in Armenia, the upcoming season and the national team