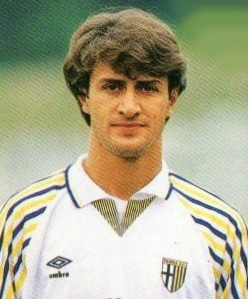 Alberto Di Chiara is an Italian former professional footballer, who played for Roma, Reggiana, Lecce, Fiorentina, Parma and Perugia, as well as for the Italian national side, as a winger and full back.

Di Chiara was an assistant coach for the Lebanese national team under Guissepe Giannini between 2013 and 2015.