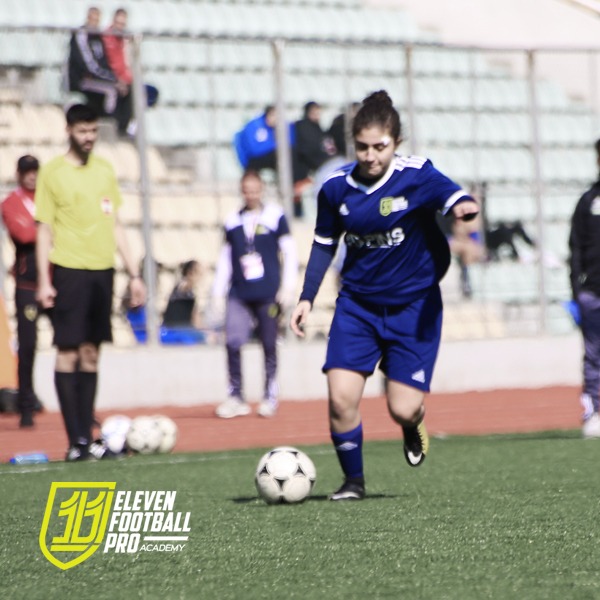 The significance of football academies is recognized in the game worldwide, as the majority of professionals are recruited by clubs through these youth focused institutions. These academies aim to prepare young players for the physical and mental challenges of professional football.

Although the Lebanese educational system is deficient in the athletics department, the country is home to various youth football academies. Many of them feature a girls’ team – or even multiple ones – and some are affiliated with international clubs.

Lebanese women’s football was kept alive by young talents who have emerged from local academies.

The most recent addition to the women’s senior league was Eleven Football Pro (EFP). The academy’s team, featuring Lebanese National Team defender Ithamar Romanos, had a positive impact on the 2019-20 season.

Romanos’s football journey began during her early school years, and she already played for three academies so far. She first enlisted with Athletico Football Academy at age 11, training with the boys’ team while a women’s league was struggling to make its way to the local scene.

It wasn’t until three years later that she got to experience competitive women’s football. “I saw on twitter that the National Team was holding tryouts for the U17 age category, and Girls’ Football Academy (GFA) for the upcoming season.” The EFP player had a hectic week where she immediately signed with GFA and attended the National Team tryouts which secured her a spot on the squad for the 2015 U17 Arab Cup in Qatar.

Romanos was set for her first experience in the Lebanese women’s league when she signed for GFA. “Before penning the deal, I didn’t even know there was a competitive league organized by the federation”, she admits, which left her without any expectations when it came to other teams, players, and overall level of the league.

However, playing with a top tier team like GFA gave the defender an unforgettable first league experience where she had the chance to train and compete alongside some of the best local players. This opportunity impacted her personal development and increased her knowledge of the game.

The Athletico graduate became familiar with the dynamics of the league over the years, participating in the U17, U19 and senior leagues with her former clubs GFA and ÓBerytus, before moving to EFP in 2019.

Romanos points out the importance of an academy’s role in any player’s development after her first season with EFP. “I got to experience this elite, advanced level of football. Tactically, it’s by far the best team that I’ve played with.”

Other than team tactics, EFP players also have access to individual training to boost their technical and physical abilities. “The squad is very young, committed, and promising in terms of future titles.”

After her experience with the U17 National Team, Romanos received her first senior caps in 2019. She took part in the Olympic Qualifiers in Thailand as well as the 2019 WAFF Championship held in Bahrain, where Lebanon won the bronze medal.

The EFP player describes competing internationally with The Cedars as an exciting and surreal experience. “I think any passionate player around the world would want to experience the feeling of putting on the national team jersey.”

A mixture of emotions overwhelmed the defender as she felt proud but also pressured to push herself and bring her best performance forward. “The team was loaded with young talents and high caliber players, which motivated me to prove myself.”

Romanos regards her participation with the National Team as a huge achievement and a beneficial experience. She believes that exposure to higher level teams from the region helps improving a player’s mentality and development.

“It’s a lot different than playing locally. You gain maturity on the field and learn how to make decisions in certain situations.” Even though she didn’t realize what she gained at the time, she admits her improvement become obvious upon returning to her club.

This international exposure is what Romanos believes has been boosting the level of the Lebanese league and its players. However, more friendly involvement in the region will also benefit the local football scene.

Another aspect that might aid the development of women’s football in her opinion is media coverage. “The media has been recently shedding more light on the game which is a good step but there’s still a long way to go.”

International involvement and financial support are as important as media attention, according to Romanos. However, she insists that the major issue lies elsewhere. “There’s a lack of development of young players. We don’t have the concept of grassroots that follows a player’s journey from the beginning.”

Looking back at her first season, Romanos can clearly see how much women’s football has progressed in Lebanon, but she still has higher hopes for the local potential. “You can see how much talent there is, but we lack a lot of basics because we didn’t have the proper approach when we were younger.”