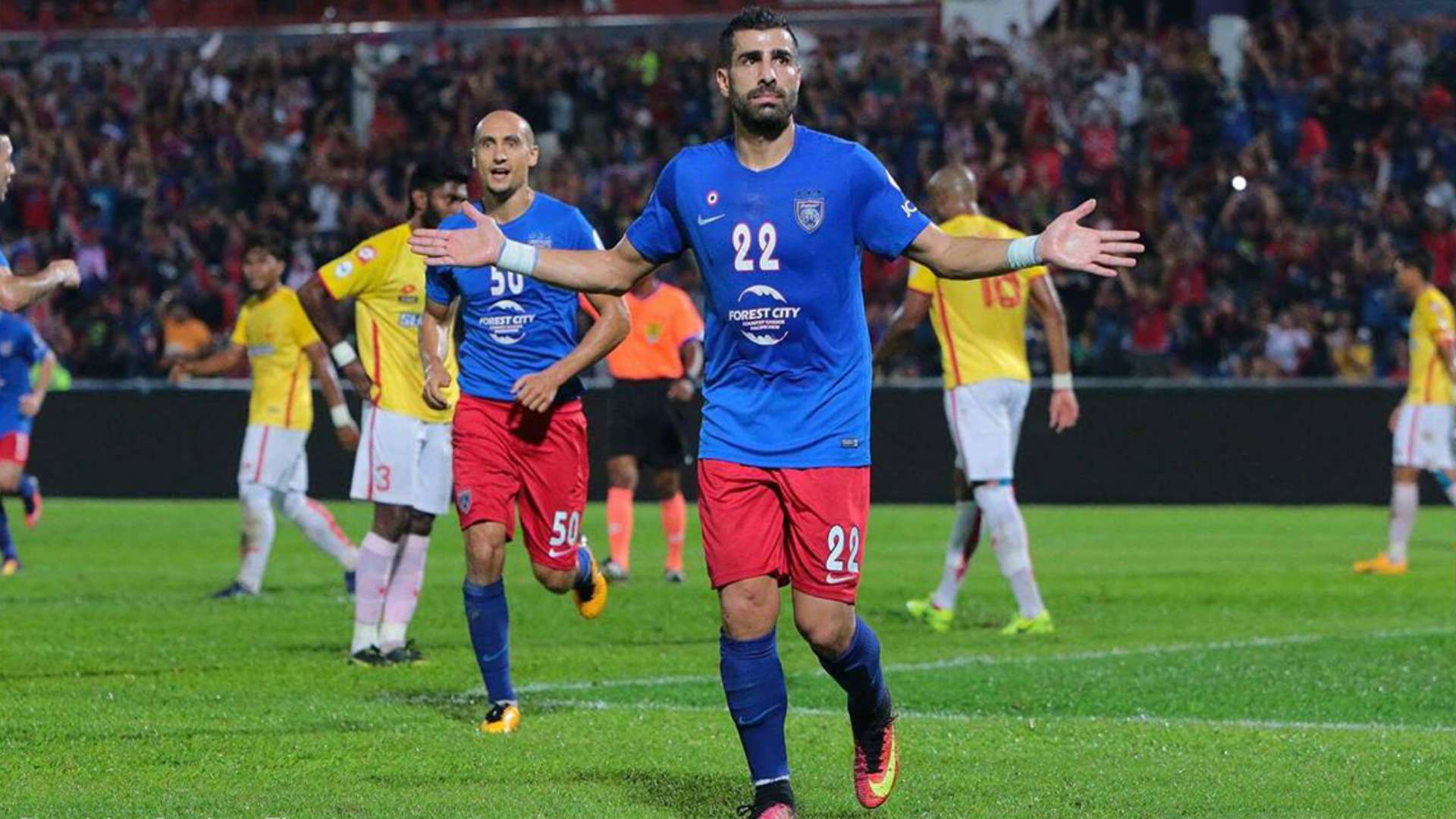 Mohammed Ghaddar is a famous name amongst Lebanese football fans in particular, and sports in general.

Having started his career as a Nejmeh player, he spent most of his career abroad becoming a fan favorite for clubs like Kelantan FA and Johor Darul Ta’zim in the Malaysian league.

FA Lebanon sat with Mohammed and came up with the following interview.

His time in Malaysia

Mohammed explained how his mental strength was crucial as it emancipated the best version of himself as a professional player.

“Many good players came to Malaysia but didn’t stay because they couldn’t cope with the conditions or the footballing system. Personally, I encountered a lot of difficulties in the early stages of my stint at Kelantan. In the end, I was selected as Player of the Season after helping my team win the domestic double. It was my performance during this season that convinced me to stay for 7 years in Malaysia.”

“I am very satisfied with my time in Malaysia. Winning 7 domestic titles and being selected best player of the season twice in a foreign country is something to be proud of.”

The past season was a hard season for Ghaddar. He had to show some mental strength after sustaining a career-ending injury at the age of 34.

“After suffering an ACL injury in my last season with Kelantan (2018), I joined Johor II, won the Challenge Cup and ended the season as the second top scorer of the league. That season means a lot to me.”

“The Malaysian Super League is a very good competition and is currently evolving. The clubs have great facilities that bond well with their professional mentality and that’s why they are now playing in the AFC Champions League.”

Ghaddar compared the Malaysian football model to the Lebanese one.

“Football in Lebanon will never evolve if the mentality doesn’t change. We don’t have either good stadia nor good media. Lebanese football does not even attract enough fans to the stadium. Plus, we don’t have good pillars, solid basis to move forward.”

“A professional league doesn’t imply giving a contract to 3-4 players per club. We won’t be a professional league in a million years. The mentality of everyone involved must change: whether the federation, the clubs or even the players. We’re still below 0 at this point.”

“We have very talented Lebanese players and they might shine if they play in foreign leagues. But as a team player, the Malaysian will always stand out more. In general, football in East Asia is evolving fast while we are happy just to draw with Korea Republic.”

Having played 42 games and scored 19 goals in the process, Ghaddar was a wrecking force in the Cedars’ attack. After his early retirement in 2017, the striker spoke about the current conditions of the national team.

“I have never met the current national team manager (Liviu Ciobotariu). I have watched several games and saw a well-organized team. I hope we get some good results, but let’s be honest, the other teams are better than us and are evolving faster. We depend heavily on individual skills, which isn’t very good.”

“In my opinion, I think we could’ve aimed for a better coach than Liviu. Anybody who says that the appointment is only based on the salary is a liar, whoever he may be. They could’ve brought someone better than [Miodrag] Radulovic too but they wanted someone they could take under their wings.”

“Our federation works on a quota basis. As long as it is a spitting image of this country, we won’t even win a bottle of Pepsi.”

Ghaddar elaborated on that incident because of which he was not given the captain’s armband, which resulted in his retirement from international duty.

“I don’t have any problem with the federation. There was a known custom that the oldest player would take the captaincy. Just a day before we won 2-0 against Hong Kong, the decision taken was to make Maatouk the national team captain. I wasn’t pleased by the way the matter was handled.”

“They [the federation] were supposed to talk to me and tell me beforehand that the decision was made. I am not saying they should’ve taken my permission, but at least to give me a heads up.”

“I told the coaching staff that I will play the game [against Hong Kong] for the sake of the team but I am not coming back unless I am the captain. They tried to call me up for the next game which was at my club’s home ground [Johor] but I refused to come back without being captain.”

Ghaddar didn’t have any regrets when he took the early international retirement decision early, stating that he doesn’t care at all about the records he could’ve broken.

“I was so close to becoming the ultimate top scorer for the national team but that means so little to me. I wasn’t respected so I left, my dignity means a lot more to me.”

“I have no problems with (Hassan) Maatouk, we were never close and that’s how I am with almost everyone in this sport.”

Ghaddar then reflected on his time as a Cedars player.

“The years between 2011 and 2014 were the best for me, even though I wasn’t called up regularly as I was put on the blacklist.” (laughs)

“I don’t see myself taking a selfie with someone just to seem friendly and maybe that’s why they don’t like me.”

“If I were called up to all the games I was available for, I would’ve broken every record for the national team.”

Ghaddar gave his impression on the local league.

“It’s a cycle. You can’t have good media without having a good league and you can’t have a good league without good stadia and so on. A weak federation like ours should’ve resigned a long time ago and let competent people take commands.”

“Everyone who invests money in this league is a fool. Probably he does it just to gain popularity.”

“In Malaysia for example, every team has its own stadium and 2 or 3 training facilities at its disposal. In Lebanon, clubs like Nejmeh gloat about having the most fans but at the end of the day, players take their shirt to wash it after the game.”

“That’s a very positive achievement (Ahed winning the AFC Cup) but I hope they can build on it. Maybe we can get a seat for the AFC Champions League. Ahed do have the resources to get there.”

Then Ghaddar elaborated on the club where it all started for him, Nejmeh, using a passionate yet deceived tone.

“Very few Nejmeh players now know what it means to wear this kit. These times are very different from my playing days here. Now everyone thinks from a financial point of view; I don’t think it’s wrong but being a Nejmeh player demands some sacrifices.”

“I sat down with the Nejmeh president [Assaad Saccal] but we didn’t have an agreement. It wasn’t about the money; I wasn’t convinced by the project, not at all.”

One Eye on the future

Ghaddar confirmed to FA Lebanon that he wouldn’t consider playing in Lebanon unless it’s with Nejmeh, but he wasn’t assertive about retiring.

“I would not play with any other Lebanese club than Nejmeh. If I don’t have an agreement with a foreign club, I’ll either play for Nejmeh or retire. Nejmeh is the only club that can take the credit for the making of Mohammed Ghaddar; and by Nejmeh I mean the club, not some people in the administration.”

“I am heavily considering retirement. Since I won’t be playing for Nejmeh, I intend to stay away from football if I retire. I have a small personal business that I want to focus on.”

Ghaddar went on to talk about life after football and what are the options in front of him.

“I love Nejmeh but I can’t see myself as a part of the current administration. In the future, I can help the club using my network to bring the best players to the club or maybe as a club manager.”

“I think about staying in Malaysia and use the fame I’ve had there but I don’t want to spend more time away from my family and I don’t want my kids to grow in another environment/culture. You start to see things differently as you grow up.”