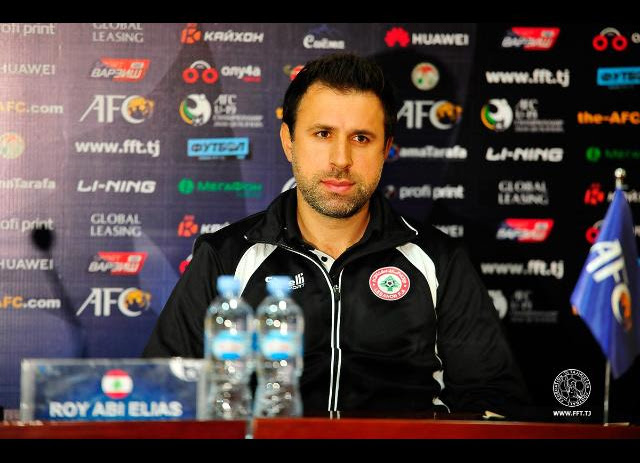 “With my background and experience, I understand what it takes to build players for the top level”.

There aren’t many coaches in Asia’s youth football who can boast of having coached players who now play in the top leagues of English football. But Roy Abi-Elias, the head coach of Lebanon’s u-19 national team, who was actually born and raised in the United Kingdom, is at the head of an exciting generation of talented young Lebanese coaches. Abi-Elias worked at the academies of professional clubs Wycombe Wanderers and AFC Wimbledon, where he was the head coach of the u-18 team, and counts among his former mentees the likes of current Bournemouth and former Liverpool winger Jordon Ibe, Hull City goalkeeper Matt Ingram and Nottingham Forest’s Matthew Cash.

“There is a number of players that I have worked with back in England (…) that are [now] playing between the Premier League, the Championship and League 1 and League 2 [and] I know what level is needed to play at that standard. I try to give the best I can for the local players here to be able to develop themselves to a similar level where they know if they do travel (…) they know what to expect”.

Bringing the experience to Lebanon

Roy Abi-Elias, who for a year was also an assistant coach and head fitness coach at Gloria Buzau, then in the first tier of Romanian football,  is one of the most experienced coaches in Lebanon’s grassroots football scene. He is currently in his eighth year at BFA (Beirut Football Academy) after having started his Lebanese career at fellow grassroots academy Athletico, where he won their first u-15 league title in his debut season. And with the National team, he tried to use his experience to help develop the local players further, introducing fresh ideas, particularly regarding the training program. One of the fresh ideas he brought was his rotation of the captaincy, explaining that “it’s very important to give responsibilities to different players and give them the opportunity to lead the team [as] it’s part of their development”.

There was evidently an adaptation period when he first came to Lebanon. “I found it very difficult when I first came here (…), it was a completely new experience, a different culture of football”. But fast-forward to almost a decade later and Roy holds over 20 titles. This year alone he won both the u-12 national league with BFA and the Junior Varsity Football Cup with the Lebanese American University. He also led his BFA team to an impressive last 16 finish at the Gothia Cup in Sweden, beating some of the biggest professional clubs in Sweden along the way.

These are the types of achievements that made him a great candidate for the u-19 National Team job, which he took a year ago ahead of this year’s AFC qualifiers, starting with a trial to select players for the ISF Championship in Serbia. “The advantage I had was that I had worked with that particular age category with BFA [and] had won the national championship a few years back so I was very aware of what was available”.

The ISF Championship in Serbia was the first step in the preparations for the qualifiers and Lebanon put in an impressive performance, reaching the quarter-finals and beating hosts Serbia and Chinese Taipei on the way as well as recording a draw against eventual winners Brazil. The eighth-place saw them finish ahead of the likes of Belgium, France, and Germany.

They also hosted Oman for a couple of friendly games in April and trained throughout the summer, organizing a couple of internal camps and playing friendlies against the first teams of several first and second division clubs before traveling to Armenia for a camp where they played twice against the u20 Armenian National Team which had just hosted the European Championships.

” [The preparations] were pretty good to be honest although it would have (…) been more advantageous to prepare for longer (…) because we are competing against other National Teams that have been preparing for 3, 4 or even up to 7 or 8 years”. Indeed, Lebanon’s lack of long-term planning has been the downfall of their youth teams for many years and is the reason why we are yet to see a National Team fulfill its true potential.

The importance of the diaspora

However, a really positive change that came from this campaign was the introduction of the diaspora as a considerable pool for selection, following in the footsteps of the senior team which has recently seen the likes of Hilal El Helwe, the Melki brothers (Alexander and Felix), Joan Oumari and Bassel Jradi among others thrive after joining from abroad.

“We had roughly 7 or 8 diaspora players contact us initially but overall 5 came to Lebanon to try out in the summer”. Of these 5, four would be selected for the final squad: UK-based goalkeeper Tarek Najia, German-based midfielder Mohamed Atwi, Swedish-born forward Elias Aslan and former Bulgarian youth international striker Eyad Hammoud. Midfielder Mahdi Hammoud also joined the squad from Canada. The large presence of diaspora players was unprecedented for a Lebanese youth national team.

And according to Roy Abi-Elias, this was a big positive. “[Diaspora players] bring a different style of football with them. They play much quicker, their decision-making is much quicker. They are more physical as well [and] fitness-wise they are better prepared. [Finally] they add value by creating diversity within the culture of football and [their presence] certainly helped to educate the local players as well [as to] how they should behave and how they should perform”.

But while the benefit of integrating diaspora players into national team squads is undeniable, it brings with it important questions regarding balance and whether an overreliance on diaspora players could negatively affect the development of the local game. “It is extremely important to develop homegrown talent not only for the national teams but for the local teams and domestic competitions to prosper. However, I do believe that a mix of both local and diaspora players can help raise the standards (…) where players can learn from each other and change the mindsets of local players in understanding what it takes to play at the elite level”. Roy Abi-Elias also believes that the initial effort must come from the players who should “demonstrate their motivation and desire to represent Lebanon” and that the door is always open for foreign-based Lebanese players to join the Cedars.

The hope for the Cedars is that this campaign will set a precedent for future youth national team coaches to look abroad for talent and for Lebanese footballers playing around the world, those being very numerous especially in top European academies.