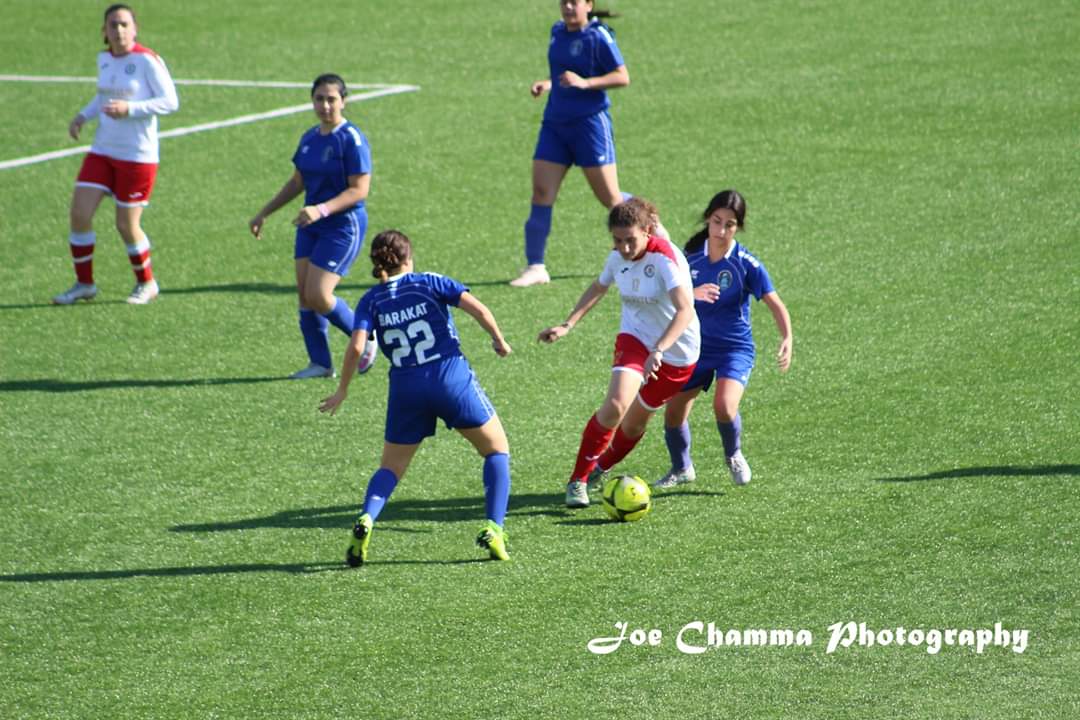 Lebanese women’s football is currently being taken over by a generation of young, talented, and dedicated girls, who haven’t shied away from showing off their commitment to football, their personal training, academics, and other activities.

One example is Lebanese National Team and O’Berytus midfielder Christelle Bedran, who in addition to being football player, is a sports enthusiast, a children’s coach, and a full-time student.

Bedran is a university student currently majoring in Sports Science. Her plan for the future is to become a researcher and work on introducing sports as an essential part in the treatment of certain neurological diseases.

Her passion for sports has also led her to take part in a number of different sports such as basketball, badminton, swimming, and horseback riding. She has also had a go at coaching in youth football academies.

Bedran was first introduced to football training when she accompanied her brother to Al Nasr academy in Hadath years before they started a girls’ team. The academy eventually set up a team that went on to dabble in the Lebanese women’s senior and U19 leagues.

Three seasons into the formation of the Al Nasr girls’ team, the O’Berytus player got her first taste of silverware. In 2017, the Lebanese federation introduced the U17 league, in which she and her teammates participated and came out as champions.

After her experience at Al Nasr, the defender decided to help found a club called Sporting High along with her academy teammates. “There were a lot of teams to choose from, but I wanted to enjoy my first league experience with my friends.” They competed in the 2018-19 women’s senior league before shutting down the club due to lack of resources.

Going into the 2019-20 season, Bedran was approached by a number of teams and was ultimately convinced to join O’Berytus. “I felt most comfortable with the team spirit among the girls there, plus the coach was great.”

Her success in the league granted the Al Nasr academy graduate a National Team call up on several occasions, for both the U19 and senior squads.

She first featured with the National Team at the 2018 U18 WAFF Championship held in Lebanon, finishing as a runner-up. Later that year, Bedran was also included with the U19 squad for the first round of the locally hosted U19 AFC Championship qualifiers, and again the following year for round 2.

The O’Berytus player then made her senior debut in 2019 at the WAFF Championship in Bahrain, helping Lebanon reach the podium with the bronze.

Unlike many of her fellow footballers, joining the National Team isn’t her main goal for performing well on the field, and regards representing Lebanon more as a privilege that comes along the way. “My aim is to enjoy doing what I love, and it’s always an honor to be included in the National Team.”

Even though local women’s football has recently been flourishing, Bedran believes that it is still being disregarded by the majority of the Lebanese society. She suggests that female athletes should receive support not only from their families, but also from the federation, and even the ministry of Youth and Sports. “If not financially, at least morally by showing the girls their interest.”

The media also plays a huge role in her opinion and can be very helpful to expand the reach of women’s football and sports in general. “Girls can get good results too. They just need a chance to show the world.”