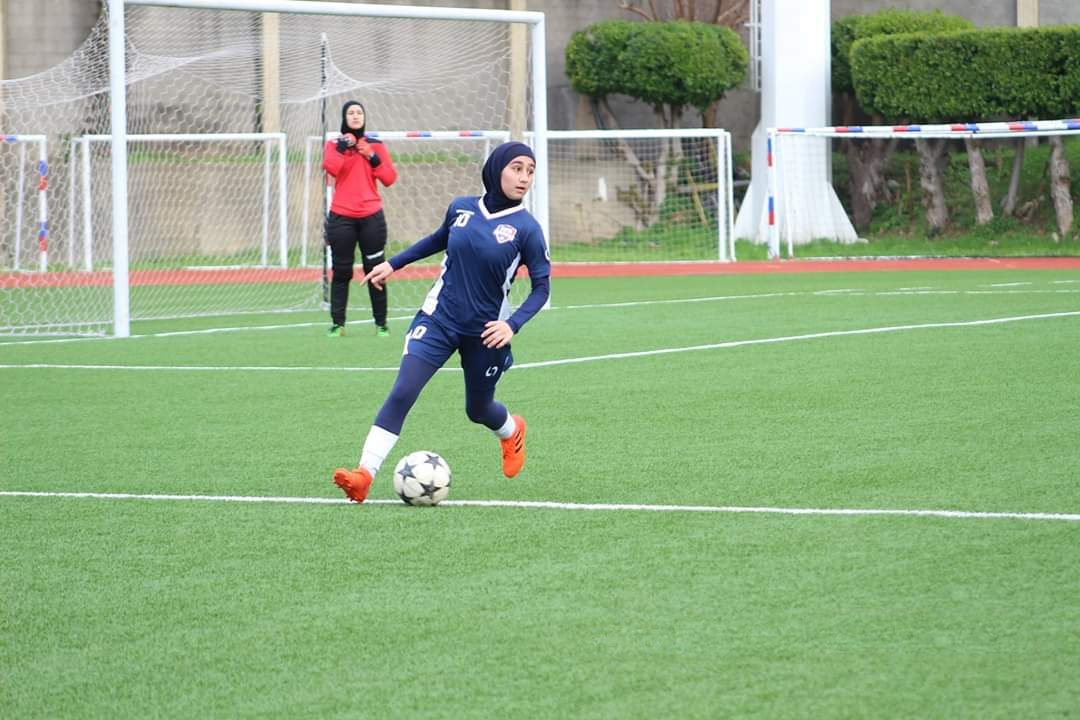 It might not be as popular as men’s football just yet, but Lebanese women’s football has recently been on the rise, with different age groups of the National Team bringing home trophies and medals.

The credit goes to a generation of young women who went to a male dominated field and proved to be among the country’s best.

Lebanese National Team and Beirut Football Academy (BFA) midfielder Fatima Khashab is a member of this club, and has made her way into the football world where she plans to stay.

Knowing that a football career isn’t a practical option in Lebanon, the midfielder decided to pursue a degree in physical education, which allowed her to remain in the athletic field practicing what she loves the most.

Khashab first gained interest in football during an elementary school P.E. session. Like most boys, her classmates were hesitant to include her in the game, but were later blown away by her skills and turned her into a regular player.

Her proper training began a few years later when she joined Al Ansar’s FAME youth academy at 12 years old. Much like Khashab’s experience at school, the academy only accommodated boys’ teams, but that didn’t stop her from showing up and learning.

A couple of years later, a staff member at the academy pointed the BFA player to women’s league title holders SAS, who were organizing tryouts at the time. Her performance in these sessions proved successful, as it led her into both the SAS senior squad as well as the U19 National Team tryouts.

The midfielder described her first experience in the senior league as challenging. “It was tough at first, I was used to playing mini football and suddenly, I was on a full field”, but she was able to adapt by watching football games.

After three seasons with SAS, Khashab had a one-year spell with both Girls’ Football Academy (GFA) and Zouk Mosbeh, before eventually moving to BFA for the 2018-19 season.

The former SAS player admits that, like the local league, her first experience with the National Team was challenging as well. She also highlights the importance of having different age groups to ease players in their transition into the senior squad.

“I first started training with the U19 squad when I was 14, they [the other players] were much older than me and it was all unfamiliar.” This almost made her throw in the towel, but luckily her parents convinced her to persist in order to reach her goals. As a result, Khashab was included in the U19 squad for a tournament in Jordan, which she realized was a great learning experience. “I didn’t get to play any matches, but I used it as a chance to train and be ready for the next tournament.”

And indeed she was. The 2015 U17 Arab Cup came next, and the BFA player was called up to help the Cedars’ win the gold medal in Qatar. “It was such an amazing experience. I was more comfortable with the squad, proud to be representing Lebanon, and winning it was the cherry on top.”

Khashab was then introduced into the senior National Team last year, where she was called up for the 2019 WAFF Championship in Bahrain. The midfielder made two appearances in Lebanon’s third-place run-in.

As happy as the midfielder is with news of the National Team’s success being shared, she believes that it’s still not enough. “The media only highlights the team if they get good results after the end of a competition, and the league gets barely coverage.”

She feels that the competition and its results should get more attention and be discussed more regularly in the media. Also, more light should be shed on the less popular players to help boost their morale, which will better aid their development.

Other than that, Khashab insists that the federation should be responsible for providing the players with more practical resources, such as funding to help develop the clubs, and even transportation to ease their families’ concerns about them traveling long distances, sometimes late at night, on their own.

“We should get rid of the concept that football is a boys’ game. Girls can do just as much and we aren’t lacking in anything, especially not in talent.”