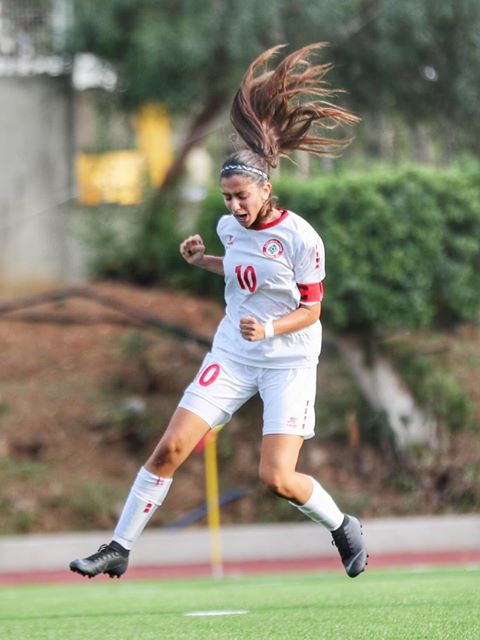 One distinguished trait in Lebanese women’s football is the immense amount of dedication shown by its players. Female players always put more personal effort into their improvement because of the lack of national support.

Lebanese National Team and SAS forward Yara Bou Rada is no stranger to devotion, as she commits a lot of her time to football training. “If I’m not playing football, I’m either working out at the gym or doing training drills at home.”

Although football is her main passion and lifelong dream career, Bou Rada is also a full time university student majoring in economics. “My parents have always persuaded me to have a plan B, you never know what might happen in terms of injuries.”

Growing up in Zgharta, the SAS player was met with encouragement from her football loving family to enlist in the Salam Football Academy from the early age of seven. Even though it was exclusively a boys’ academy at the time, she was persistent to train and learn with them. Years later, Salam Zgharta finally set up a girls’ team, and so began Bou Rada’s competitive experience.

Her first league participation was in 2015 at the U17 level, which she describes as more of a learning experience than a successful one. “We weren’t trained enough and not playing on a full sized field. We were beaten 15-1 in our first game!”, and this defeat was followed by many others in the next games.

“It was always tough traveling all the way to Beirut early in the morning and coming back having lost the game”, Bou Rada admits. However, the Salam Zgharta coaching staff did not lack motivation to encourage the Lebanese forward and her teammates, advising them to take their first season as a learning example.

In the next season, Bou Rada and her hometown club went from zeros to heroes but narrowly missed on the jackpot as they finished second to Al Akhaa on goal difference in the U17 league. The young northerners began to tie and even win their league matches, as they surpassed expectations. “We started from losing with by 14 goals to finishing 2nd, I hope all new teams can follow our path.”

In addition to the U17 league, they were also involved in both the U19 and senior leagues. After two seasons of hard work, Bou Rada and the Salam Zgharta squad were able to compete at higher levels and secure 3rd place in the senior league.

In 2018, Bou Rada joined Lebanese women’s league title holders SAS. Back at the time, she did not have intentions to leave Salam Zgharta, but her move to Beirut for education led her to choose another team closer to her new residence. “At the time, they [SAS] and Zouk Mosbeh were the front runners, but I’ve always admired SAS.”

Bou Rada has had two successful seasons with SAS so far, winning the league on both occasions and competing in the WAFF clubs’ championship. She considers their regional participation to be a very important experience because it exposed them to professional league players. Moreover, SAS were able to represent Lebanon in a good fashion as they finished runners-up of the tournament.

Representing Lebanon on the international scene wasn’t new for the ex-Salam Zgharta player, who had been involved in the U19 and senior squads of the national team. She still regrets missing out on the 2015 U17 Arab Cup in Qatar, admitting that she was unaware of the call up. “Once I heard about the tournament, I directly contacted the coach to ask if I could still try out, but it was too late and the squad was already set up.”

Bou Rada then redeemed herself in the U19 tournaments which she describes as the best experience of her life. She participated in the 2018 U19 WAFF championship that was held in Lebanon, where the Cedars came in 2nd. That year, she was also successful in the Asian Cup qualifiers, even though no one expected them to perform well because of their lack of training.

The SAS forward was recently called up to the senior squad at the 2019 WAFF championship in Bahrain – helping the national team secure the 3rd place – as well as the Olympic qualifiers that were held in Thailand.

Even though their results keep improving and exceed expectations, Bou Rada believes that Lebanese women’s football still has a long way to go. “The main issue in funding of course, along with media coverage.”

According to her, the lack of attention from media outlets has been restricting the ability of clubs to attract bigger sponsors. “It’s sad to see a team like SAS represent Lebanon abroad without a sponsor.” She also feels like this attention can aid more players in receiving professional offers.

Bou Rada insists that women’s league and national team matches should be broadcasted on TV to reach wider audiences. “I’m sure that most people in Lebanon still think that women’s football is not up to par, and I believe that if they watch the games they’ll realize the level is a lot higher than they’d expect.”

She hopes that the local scene can keep progressing, and sees that Lebanese women’s football can become a leading force in the region in the future. “The upcoming talents really deserve it.”