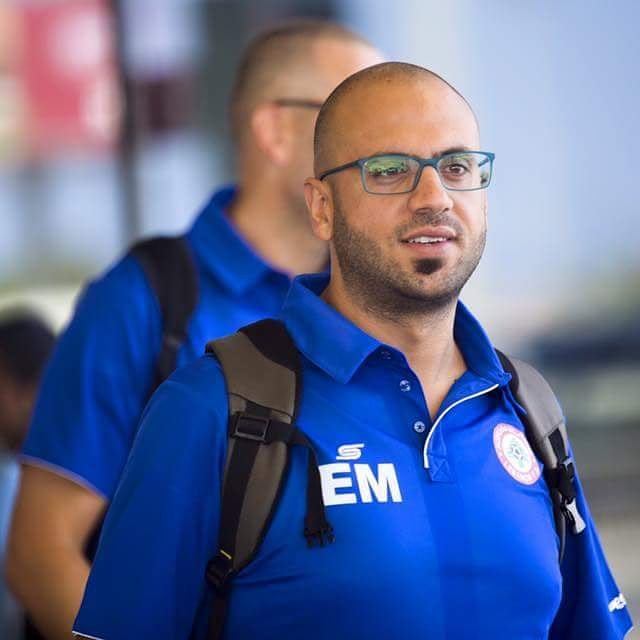 The subject of injury prevention in football has become important. In Lebanon, the risk of injury is unfortunately increased, for two reasons:

The return of the league on March 19 after a three-month hiatus.

The very busy schedule for players of Ansar and Ahed (3 AFC Cup Group games in the last week of May) and the players of the national team (3 games from June 7 to June 15 as part of the World Cup Qualifier).

To these ends, Fa Lebanon has interacted with Elie Metni, physiotherapist of the Lebanese national team. Elie Metni also leads a campaign on his Instagram account which is that of a great awareness of the importance of physiotherapy.

Tell us more about yourself and how you have made it to the national team as a physiotherapist ?

I am a physiotherapist since 2005. I hold a master’s degree in manual therapy, sports injuries and physical rehabilitation. I have experience in sports injuries since 2006. I started as physiotherapist of Lebanese football national team U14 and U18 from 2006 until 2009. I was a member of the doping committee in the Beirut International Marathon from 2006 until 2009. I have also worked with several football, basketball and athletics teams. I am the physical therapist of the senior National Football Team since 2012. I represented the Lebanese Football Association in several AFC (Asian Football Confederation) medical conferences.

From your experience, is it true that the clubs and players changed their approach towards the importance of fitness?

For Lebanese football players and teams, the fitness was neglected. In my opinion, the federation and the national team staff all over the past years have played an important role in highlighting the importance of fitness training to prepare well the players in pre-season and to protect them from injuries since the fitness trainer have been always a part of the national team technical staff.

After an interruption of three months, the clubs were allowed to come back to the training on March 1. The league will come back only two weeks later. Will the players be at a particular risk of injury?

The interruption of the trainings due to COVID-19 pandemic and the problems in our country is one of the main reasons of muscle injuries. I hope the 2 weeks period will be sufficient for the teams to prepare their players to game level again even though it’s gonna be a short period.

In the last week of May, Ansar and Ahed players, who have alot of national team players, will play the AFC Cup group stage games. Then in the first week of June, Lebanon will play 3 Asian’s World Cup Qualifiers games in less than 8 days. Will be the fitness of the players an issue?

The excessive number of games in a short period increases the risk of injuries especially the ones related to muscles due to overloading in local players and clubs since they are not adapted to this busy schedule. Hopefully, there will not be interruptions anymore and the clubs and the national team will have chance to prepare well their players. Plus the importance of recovery program — recovery training, physiotherapy recovery sessions and proper diet and rest protocols — during this period will play a big role in preventing injuries and preserve high performance level.